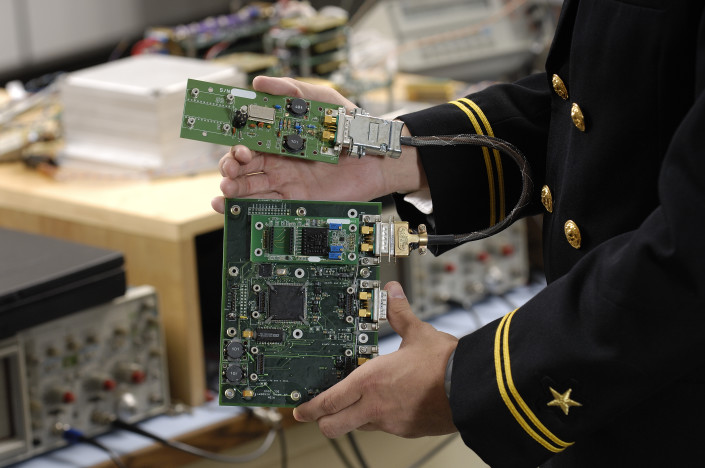 The microdosimeter instrument consists of small sensors connected to an electronics board, shown here without the casing. Spacesuits integrated with this technology can warn astronauts at the onset of an elevated exposure event, assess risk, and help crews determine safe locations during these periods. Photo by James T. VanRensselaer.

Exploration-class missions will expose astronauts to various types of radiation. During missions beyond low Earth orbit (LEO), radiation exposures from bursts of solar radiation, called solar particle events, could impair an astronaut’s performance and result in mission failure. Acute health problems can include nausea, vomiting, fatigue, skin injury and changes to white blood cell counts and the immune system. Space travel beyond LEO is also associated with exposure to galactic cosmic rays, which may lead to long-term radiation effects such as damage to the cardiovascular system, eyes, and central nervous system. Exposure to space radiation may also increase cancer risk.

The Radiation Effects (RE) Team is focused on understanding and mitigating the risks related to exposure to various types of space radiation. The NSBRI Center for Space Radiation Research (CSRR) is the central component of the Team with multiple projects addressing the effects of exposure from both solar particle events and galactic cosmic rays and better defining the risks to astronaut crew members.

This research will have benefits for medical treatment and could be used for threat detection by agencies such as the Department of Homeland Security.

The Radiation Effects Team works to define risks and develop practical countermeasures against both the acute and long-term (or so-called “degenerative”) effects of space radiation. Team efforts often include partnerships with other NSBRI science and technology teams.

The Team’s anticipated deliverables for spaceflight include:

Like spaceflight, radiation exposure is also a concern in the health industry and for other occupations on Earth. The Radiation Effects Team’s research benefits for life on Earth include: