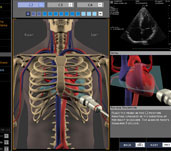 This slide within the Onboard Proficiency Enhancement training program instructs an ultrasound operator on correct cardiac scanning position. The training guide highlights the basics of ultrasound examination such as probe positioning, the location of the organ within the body, the size and structure of the organ, and what the correct ultrasound image should look like on the monitor. Click here for larger picture.

Scott A. Dulchavsky, M.D., Ph.D., views a laparoscopic image of a surgical procedure being performed remotely by a non-physician on the NASA Microgravity Research Facility. He uses just-in-time training, combined with voice commands, to guide a minimally trained operator to perform complex procedures in space or on the ground. Click here for larger image.

Researchers with the National Space Biomedical Research Institute (NSBRI) have developed a computer-based training method that teaches non-physicians to operate ultrasound as if they were technicians. Crew members for four International Space Station (ISS) missions have trained with the program and have performed ultrasound techniques while in space. The ultrasound program also has been used by trainers with the Detroit Red Wings hockey team.

"In isolated places like the ISS, we don’t have the luxury of a radiologist or specialist onboard," said Dr. Scott A. Dulchavsky, a researcher on NSBRI’s Smart Medical Systems Team. "Our goal is to enable someone working in a remote environment to assess and manage an emergency medical condition."

In space, ultrasound can be used to assess a number of injuries such as trauma to the eye, shoulder or knee, tooth abscesses, broken or fractured bones, a collapsed lung, hemorrhaging, or muscle and bone atrophy. It normally takes 200 hours plus yearly updates to learn to operate ultrasound, but Dulchavsky and his team developed an education method that cuts the time to two-to-three hours a year.

Dulchavsky also sees this ultrasound training method as beneficial to battlefield medics and emergency responders. Injury severity can be assessed and decisions made whether to treat injuries on site or transport to a hospital.

"With remote guidance, we virtually couple a modestly trained operator with an experienced medical expert, essentially making the non-physician the hands of the expert," said Dulchavsky, chair of the Department of Surgery at Henry Ford Hospital in Detroit. "There is tremendous potential for space medicine and benefits for Earth."

The program consists of a computer-based instructional presentation on the basics of ultrasound examination and examples of remote guidance. Remote guidance is presented in experiment-specific sections, comparable to visual case studies. "One video session walks you through basic positioning, and the next one might demonstrate how to image a bone," Dulchavsky said.

After the computer-based instruction, trainees participate in a hands-on session where they perform abdominal and musculoskeletal ultrasound scans. A video stream from the ultrasound device is split between the on-site monitor and the remote location. Watching the simultaneous video feed, the remote medical expert can see the trainee’s ultrasound images. He or she uses voice commands to guide the operator into positioning the probe and fine-tuning the settings to produce clear, useful images. The hands-on sessions are designed to closely simulate ultrasound experiments performed in orbit.

"Our next challenge is to improve the speed and efficiency of diagnosing and treating injury," Dulchavsky said. "We have the opportunity now to expand ultrasound from the medical and hospital setting to include assessment capabilities for sports, emergency medical care and for under-served areas of the world."

NSBRI, funded by NASA, is a consortium of institutions studying the health risks related to long-duration space flight. The Institute’s research and education projects take place at more than 70 institutions across the United States.