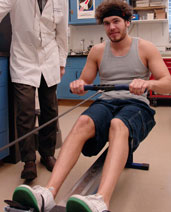 To preserve astronaut health on long missions, NSBRI is researching the benefits of rowing as part of an exercise program to counteract space-related heart, lung, muscle and bone problems. Click here for larger photo. 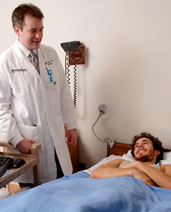 For five weeks, participants lie at a six-degree angle and leave the bed only when performing exercise training. In this position, subjects show physiologic changes similar to those expressed by astronauts in microgravity for long periods. Click here for larger picture. 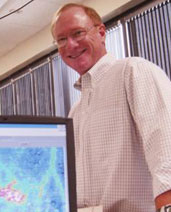 Dr. Benjamin D. Levine is team leader for NSBRI's Cardiovascular Alterations Team, professor of medicine and director of the Institute for Exercise and Environmental Medicine, a collaboration between UT Southwestern Medical Center and Presbyterian Hospital of Dallas. Click here for larger image.

If one part of your car isn’t properly maintained, it can affect how the entire vehicle runs – especially if you’re taking a long trip. The same can be said for the human body. That’s why, when it comes to fitness in space, it’s important to create a program addressing the whole system, parts included.

To preserve astronaut health on long missions, NSBRI is researching the benefits of rowing as part of an exercise program to counteract space-related heart, lung, muscle and bone problems.

To keep astronauts healthy on long missions, researchers with the National Space Biomedical Research Institute (NSBRI) are developing an integrated exercise program that addresses a number of the physical changes caused by microgravity.

"Exercise has long been considered a solution for many of the health problems encountered in space. In addition to psychological benefits, it preserves physical fitness, circulatory function, and bone and muscle strength," said Dr. Benjamin D. Levine, team leader for NSBRI’s Cardiovascular Alterations Team. "To combat potentially mission-compromising health challenges, we’re focusing on developing individualized exercise regimens using the equipment available in space to produce the most collective benefit to the body."

Building on decades of research studying athletes and performance, Levine and colleagues at the Institute for Exercise and Environmental Medicine (IEEM) at Presbyterian Hospital of Dallas, which is a collaboration between Presbyterian and UT Southwestern Medical Center, have developed an exercise training program that varies intensity and duration, combines strength and aerobic work, and includes a specially-designed oral supplement of potassium-magnesium-citrate. The supplement is known to prevent kidney stones by reducing urinary excretion of calcium.

Levine is testing the regimen as part of a bed-rest study designed to simulate how weightlessness affects the body.

"With bed rest, subjects don’t bear weight on the lower body, much like the effect of floating in space. The bones bear less weight and the muscles are used less," said Levine, a cardiologist, professor of medicine at UT Southwestern and director of the IEEM.

For five weeks, participants lie at a six-degree angle and leave the bed only when performing exercise training. In this position, subjects show physiologic changes similar to those expressed by astronauts in microgravity for long periods.

When confined to bed rest, participants lie on their backs with their heads tilted slightly below their feet.

"In this position, the heart works about 15-20 percent less than during normal living conditions, there are changes in blood pressure and work capacity is lessened," Levine said.

The study involves 24 subjects divided into three groups, undergoing five weeks of bed rest. One group is sedentary and serves as the control group. The remaining two groups perform exercise training while in bed. Half of the training subjects receive the potassium-magnesium-citrate supplement and the other half receive a placebo.

"We chose rowing for several reasons – it uses a large muscle mass, it is non-impact so there are low chances for injury, and astronauts could use similar equipment in space," he said. "Because of the unique cardiovascular stresses of the combined static and dynamic work, rowers have the largest hearts of any other competitive athlete."

Static exercise, also known as strength training, exerts muscles at high contraction intensities sufficient to impede blood flow into the muscles. Dynamic or endurance-type exercise is the regular contraction of large muscle groups, characterized by activities that keep muscles moving and the blood pumping through them, like swimming, running and cycling. Rowing combines both types of exercise into a single training activity.

Of the training group, subjects perform exercise by sitting on a rowing machine with their knees level to their hearts, never standing up. The control group sits on the rowing machine for the same amount of time (no more than 30-45 minutes per day) but does not row.

Dr. Benjamin D. Levine is team leader for NSBRI’s Cardiovascular Alterations Team, professor of medicine and director of the Institute for Exercise and Environmental Medicine, a collaboration between UT Southwestern Medical Center and Presbyterian Hospital of Dallas.

"Participants train with the same periodized (or highly varied) regimen that athletes use to achieve maximal physical benefit: a program consisting of base training followed by threshold, interval and recovery training," Levine said.

The base-training session consists of moderate rowing exercise performed at a level where subjects can still carry on a conversation, but with slight shortness of breath. Threshold training, occurring one-to-two days a week, is a little faster. Called the maximal steady state (sometimes also referred to as the ventilatory or lactate threshold), subjects performing at the threshold level are working at their maximum sustainable effort.

"Professional marathon runners run at this level; pushing themselves but not sprinting," Levine said.

The interval training segment is a high-intensity, non-sustainable exercise effort where subjects push their hardest for about one-to-three minutes, building power and explosive-type energy. Each interval training session is followed by a recovery session where subjects exercise at low intensity. The regimen includes one long, slow distance effort.

"We’re finding that this kind of exercise, performed in this manner, preserves cardiac size and function, muscle mass and bone mineralization," Levine said.

Throughout the study, researchers track progress through several diagnostic resources: invasive measures of cardiac performance using heart catheterization, magnetic resonance imaging and spectroscopy of the heart and muscle to look at changes in tissue, and ultrasound measurements of both the heart and bone to see how the heart is functioning and to assess the quality of the bones of the lower extremity.

"Our ultimate goal is to develop a single, integrative exercise prescription for astronauts to use on long missions that will prevent the bone demineralization, cardiovascular deconditioning and muscle atrophy that leads to health problems in space."

POTS is a disorder whose sufferers experience problems when standing such as an excessive heart rate and low blood pressure, causing dizziness.

NSBRI, funded by NASA, is a consortium of institutions studying the health risks related to long-duration space flight. The Institute’s science, technology and education projects take place at more than 70 institutions across the United States.