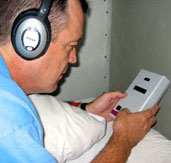 NEEMO 13 aquanaut, astronaut Richard Arnold, performs the Psychomotor Vigilance Test (PVT), a three-minute test which measures vigilance, attention and psychomotor speed. The PVT is taken at least four times a day - on waking, before and after simulated moon walks, dives and habitat experiments, and before bed. Click here for larger image. 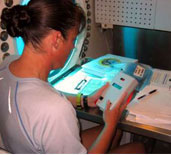 During NEEMO 12, veteran astronaut Heidemarie Stefanyshyn-Piper is shown with a Psychomotor Vigilance Test (PVT) device. Also visible on the table is a clear bag for the daily saliva samples, which are used to measure cortisol, a hormone that provides information on stress levels.  Click here for larger image.

An undersea mission simulating the space environment will provide data for development of tools to quickly assess stress, fatigue and cognitive fitness in preparation for performing critical mission tasks.

"On exploration missions, quick, self tests could allow astronauts to assess how they are functioning from a cognitive performance standpoint as it relates to fatigue and stress," said David F. Dinges, Ph.D., team leader of the National Space Biomedical Research Institute’s Neurobehavioral and Psychosocial Factors Team. "In this mission, we’ll gather data to help us refine the self tests and develop an interface component that provides immediate feedback to the user."

Dinges and his colleagues are gathering data during the NASA Extreme Environment Mission Operations (NEEMO) 13 project which takes place in Aquarius, the world’s only underwater research habitat. Located near Key Largo, Fla., and 62 feet below the surface, Aquarius is owned and funded by the National Oceanic and Atmospheric Administration and operated by the University of North Carolina at Wilmington (UNCW). The mission runs Aug. 6 to 15.

"The NEEMO environment is similar to lunar and other exploration missions in many respects. There is isolation, confinement to a small habitat and work area, the need to work together as a team, extravehicular activities, and no immediate rescue in the event of an emergency," said Dinges, a professor in psychiatry at University of Pennsylvania School of Medicine and leader of the NSBRI portion of the NEEMO projects.

Another similarity to space is that the aquanauts must perform tasks requiring high performance levels. During NEEMO 13, they will perform simulated moon walks on the ocean floor involving sample collection and construction of a communications tower.

Dinges’ project uses several methods to gather data that will be used to assess the amount of fatigue and stress related to mission activities.

"The crew takes a three-minute test that measures vigilance, attention and psychomotor speed. We’ve learned from laboratory experiments that the test is sensitive to fatigue and other factors that impact a person’s ability to pay attention to a task and respond quickly," Dinges said. "The test is taken at least four times a day – on waking, before and after simulated moon walks, dives and habitat experiments, and before bed."

The Psychomotor Vigilance Test, or PVT, was developed through Dinges’ work with NSBRI, NASA, the Department of Defense and the National Institutes of Health. The user watches for a signal and responds when it appears, allowing the measurement of reaction times.

The crew also wears a wristwatch-sized device, called an Actiwatch®, that measures the sleep and wake cycle. The aquanauts provide saliva at various times each day including when they awake, before and after performing experiments and simulated moon walks, and before going to bed.

"With the saliva samples, we measure cortisol, a hormone that provides information on their stress levels," Dinges said. "Cortisol is normally high in the morning; it’s a means of getting you going each day. If we see elevated cortisol after performing a high-level task, it would indicate some type of stress occurred during the activity." The crew fills out brief questionnaires about how hard they are working, so researchers can get a sense of their physical and mental workload. Another questionnaire focuses on mood and interpersonal interactions between the crew as well as with mission control personnel.

Dinges collected similar data during NEEMO 9 in April 2006 and NEEMO 12 in May 2007. The data from NEEMO 9, 12 and 13 will be integrated with other lab data, so that the next version of the vigilance test can be developed.

"Day in and day out, long-duration astronauts are never out of the work environment. With the type of complex, high-performance demands of the job, it will be helpful for individuals to quickly assess how they are doing relative to fatigue and stress," Dinges said. "The test would give immediate feedback and solutions, if needed, to counter whatever is affecting performance. That might be to get some sleep, take motion sickness medicine, or any number of things."

NSBRI, funded by NASA, is a consortium of institutions studying the health risks related to long-duration space flight. The Institute’s science, technology and education projects take place at more than 70 institutions across the United States.