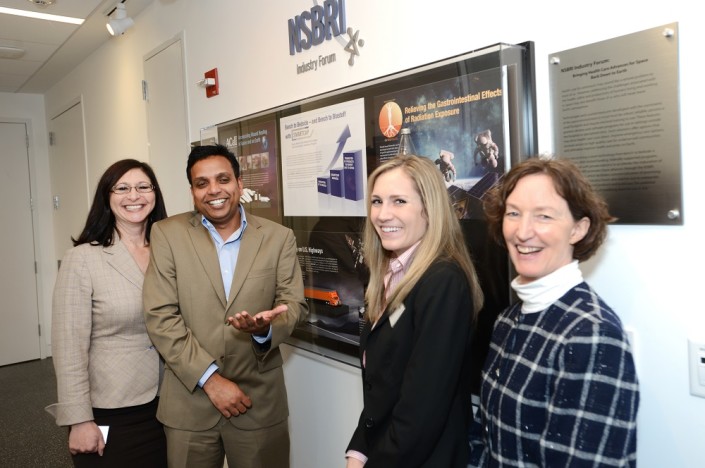 ACell is using SMARTCAP funding to evolve its marketed wound dressings into a gel-based formulation that is more appropriate for use in the space environment.  This gel will allow doctors to address a number of difficult-to-treat wounds and open up new market opportunities for the company on Earth. 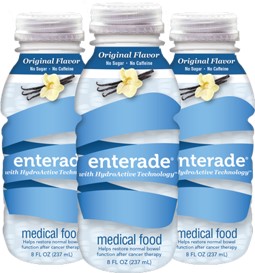 Enterade gives you a sugar-free choice for restoring hydration.

This Florida-based startup company has developed a drink that takes advantage of specific gastrointestinal ion transport mechanisms to alleviate side effects of nausea and vomiting due to radiotherapy. Enterade is using its SMARTCAP award to test whether the drink will alleviate the symptoms induced by the type of radiation exposure that astronauts are likely to experience in space.

UPDATE: Where is Enterade Now?

In 2012, the NSBRI Industry Forum awarded a SMARTCAP grant to Entrinsic Health LLC, to study the performance of its novel, patented, glucose-free rehydration solution, enterade®, a drink that may help mitigate radiation-induced enteritis in astronauts and cancer patients. A team of scientists in the Radiation Oncology Department at the University of Florida, led by Dr. Sadasivan Vidyasagar, found that enterade-treated mice experienced less nausea, less weight loss, had enhanced fluid uptake and improved survival following proton irradiation when compared to mice treated with odansetron, the current standard of care.

While the proton irradiation study has not yet been submitted for publication, an article in Health Physics in June, 2014, describes similar findings in gamma irradiated mice.  The abstract is available here: An Amino Acid Mixture Mitigates Radiation-induced Gastrointestinal Toxicity.

Based upon these outcomes, Entrinsic Health has now undertaken trials in humans to demonstrate enterade’s impact on gastrointestinal toxicity. In February of 2015, the company initiated a randomized open-label trial in partnership with 21st Century Oncology.  Approximately 50 patients experiencing gastrointestinal toxicity due to radiation therapy and/or chemotherapy will be enrolled and enterade’s ability to maintain bowel regularity will be compared to the standard of care.  The company anticipates completion of this trial in February, 2016. You can read about the study at: clinicaltrials.gov.

Additionally, the U.S. Army is evaluating enterade for rehydration in a randomized study that will enroll 44 participants and compare enterade with a commercial oral rehydration solution and sports drink containing carbohydrates. The study will evaluate three endpoints: rate of hydration, volume of fluid retained and electrolyte shifts into the various fluid compartments. The pilot phase of the study is complete, comparing enterade with water and two commercial drinks.  Enterade (at 50% and 100%) out-performed both, providing faster fluid uptake and improving fluid retention.

Entrinsic Health is planning to conduct additional trials in allogeneic bone marrow transplantation and pelvic malignancies at leading oncology centers.  Patients typically undergo total body irradiation (TBI) in advance of a bone marrow transplant leaving them immune-compromised and dealing with gastroenteritis.  Enterade will be used as a support therapy and its ability to lessen the severity of gastrointestinal symptoms will be evaluated.

Entrinsic Health negotiated an exclusive license from the University of Florida to the patent Materials and Methods for Improving Gastrointestinal Function(USPTO # 8,993,522), which  issued on March 31, 2015.  The company has filed additional patent applications covering both composition and methods of use.

In addition to ameliorating the GI impact of radiation and chemotherapy, Enterade and other products derived from the company’s underlying Hydroactive Technology™ may be effective in addressing diarrhea caused by disease.  Dr. Vidyasagar received the Bench to Bedside award from the University of Florida Health Cancer Center in 2014 in part for his efforts to educate parents in Bangladesh, India, about holistic ways to enhance hydration in children suffering from diarrhea.  His efforts led to a reduction in mortality and resulted in the WHO and American Red Cross contacting him to partner in other areas with high rates of childhood mortality due to diarrhea.  Diarrhea is the second leading cause of death in children under the age of five according to the World Health Organization.  Dehydration caused by diarrhea is a major contributing factor to morbidity and mortality.

The gastrointestinal system can experience stress from sources other than infection, radiation and chemotherapy. For example, strenuous exercise can lead to gastrointestinal complications which are usually short-lived but may impact an athlete’s ability to train and compete.  Entrinsic Health is exploring partnerships in the areas of human nutrition, health & wellness, and sports performance.

The company is commercializing enterade as a medical food product to address unwanted side effects associated with chemo and radiation therapy treatment.  Enterade is available through the company website: www.enterade.com.  Medical foods should be used under the supervision of a health professional.

SMARTCAP in the News