The Institute conducted the first independent clinical test of the Vittamed device for noninvasive assessment of intracranial pressure. The results in normal subjects and patients were significant, and NSBRI worked with the manufacturer to make improvements to address NASA’s needs. The device is being considered for operational use by NASA, and it also has applications in neurology and neurosurgery, where invasive measurement of intracranial pressure is one of the most commonly performed procedures. 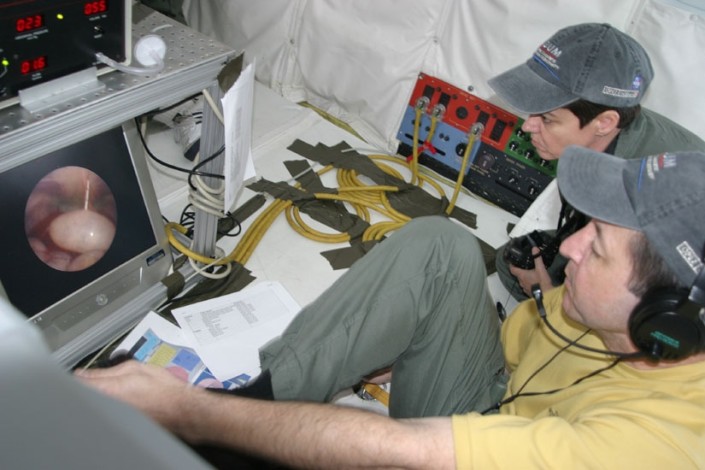 Dr. Scott A. Dulchavsky views an image of a surgical procedure being performed remotely by a non-physician on the NASA Microgravity Research Facility. He uses just-in-time training, combined with voice commands, to guide a minimally trained operator to perform complex procedures in space or on the ground. Photo by NASA.

The Institute collaborated with NASA and industry to advance ultrasound training and diagnostic medical imaging aboard the International Space Station (ISS). NSBRI subsequently supported the development of an ultrasound catalog for ISS autonomous care, obviating the need for an emergency return to Earth, which would cost more than $200 million.

Scientists supported by NSBRI developed scanning confocal pulsed ultrasound to successfully assess and improve bone mineral density, structural integrity, and trabecular strength. They also showed that the technology can be made portable, enhance fracture healing, and reduce disuse-related bone loss. These advances are relevant to use in space, as well as on Earth, where there are an estimated 10 million Americans – 80 percent of them female – who have osteoporosis, and another 34 million who have significantly reduced bone mass (i.e., osteopenia).

NSBRI conducted the first-in-human trial of non-invasively moving and clearing kidney stones. The technology, developed by NSBRI-funded engineers, may transform urological practice. Astronauts are at increased risk of kidney stone formation, and 14 have experienced stones post-flight. The prevalence of kidney stones is 5% in the United States, and increasing worldwide, with associated rising costs – greater than $2 billion in health care and greater than $3 billion in workdays lost per annum in the United States. 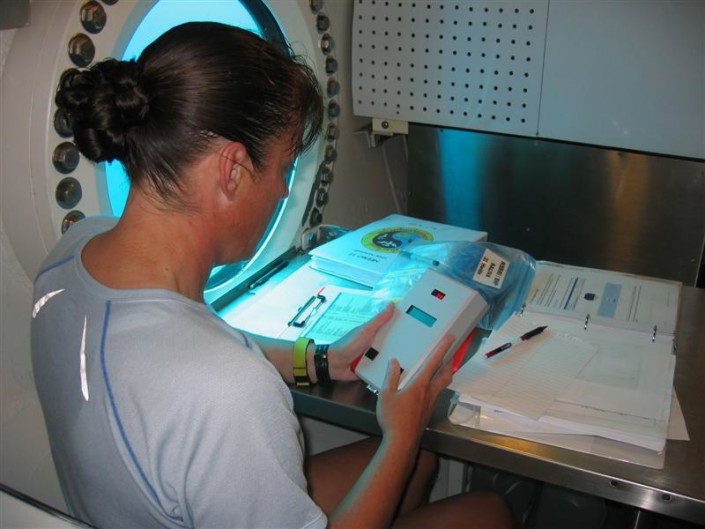 During NEEMO 12, veteran astronaut Heidemarie Stefanyshyn-Piper is shown with a Psychomotor Vigilance Test (PVT) Self Test device. Photo by NASA.

NSBRI led research to develop and employ the Psychomotor Vigilance Task (PVT), an objective assessment tool of psychomotor performance, which has become a cornerstone of NASA’s behavioral health program. The Institute conducted studies in analog environments and aboard the ISS to characterize individual susceptibilities and differences, and inform countermeasure development and requirements. The U.S. Department of Transportation relied on NSBRI-supported PVT research methods to set regulations improving truck driver health and safety, with the aim of reducing fatal tractor trailer accidents costing lives and more than $20 billion annually. An NSBRI operational deliverable is replacing dated neurocognitive assessments of astronauts during flight. A new cognitive test battery was evaluated in space analogs and has been in use aboard the ISS since 2014. High levels of cognitive performance, and unobtrusive ways to rapidly assess metrics without interfering with a mission, are important for human space exploration and other critical job areas.

The Astro-CHARM (Cardiovascular Health and Risk Modification) project is developing a tool for determining an asymptomatic individual’s cardiovascular risk. It  includes well-established risk factors like age, sex, history of cardiovascular events, use of cholesterol-lowering medications, and coronary calcium scores, all combined into a weighted and validated tool that can be used to estimate likelihood of events or to recommend that individuals take steps to reduce their risk. 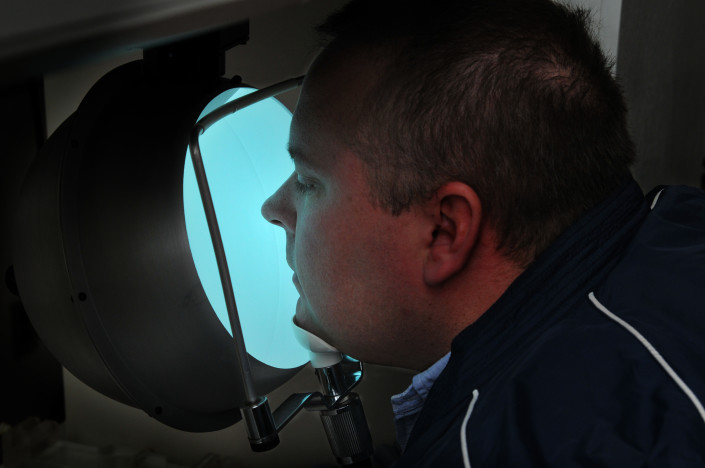 A study subject undergoes Ganzfeld exposure to monochromatic blue light at Jefferson Medical College of Thomas Jefferson University. The goal of this project is to provide lighting in spaceflight that improves the sleep and biological rhythms of astronauts.