The objective of this space flight experiment is to correlate cardiovascular parameters with ballistocardiography parameters obtained from 3D movements of the human body due to the mechanical action of the beating heart and the ejection of blood in the arteries. The aim is to better understand the cardiovascular changes following the fluid shift observed in microgravity from the analysis of the vecto-ballistocardiograms in humans. 3D-BCG will be recorded on free floating astronauts at rest and during imposed and controlled breathing protocols at different times of a space flight. Echocardiography, impedance cardiography and respiration will provide physiological correlates of the 3D-BCG curve to interpret its possible changes during the flight. A potential application of the study is the development of a wearable non-invasive monitoring system for astronauts. 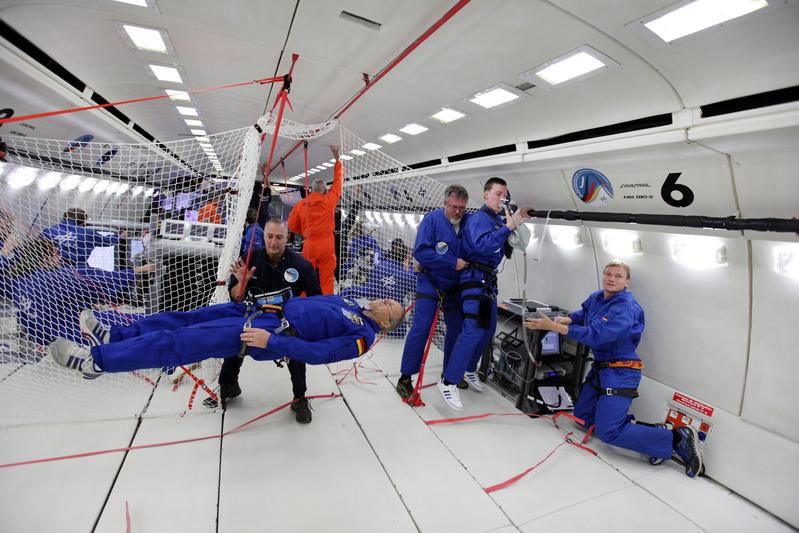 A subject in free-float in a short period of microgravity on the European
A300 ZeroG aircraft (center left). A second subject is performing
a rebreathing measurement of cardiac output (right).

This experiment "3D Ballistocardiography in microgravity" is a multinational collaboration involving, the Belgian team at the Royal Military Academy lead by the PI, Dr Pierre-François Migeotte, and which includes the participation of Prof Kim Prisk from UCSD in the US, a Russian team at IBMP (the team of Prof Baevsky and Dr Funtova), and a German team funded by the DLR (the team of Prof. Jens Tank at Hanover Medical School). The overall objective is to correlate cardiovascular parameters with ballistocardiography parameters obtained from 3D movements of the human body due to the mechanical action of the beating heart and the ejection of blood in the arteries.

The aim is that ESA will be able to implement a collaboration with the Russian space agency with the objective of performing a combined experiment on Ballistocardiography and the study of the cardiac function with traditional Echocardiography (part of the B3D project), where each of the team members will have a key element for its successful execution. This approach would result in a combined Russian/European experiment minimizing flight costs to ESA.

The three scientific teams have signed a memorandum of understanding under which the following master plan has been established:

A major accomplishment in this approach has been the development by the Russians of an enhanced Pneumocard-Ballisto device, which took the previously available hardware and incorporated a full 6-degree of freedom accelerometer package. This enhancement meets the technical requirements of the B3D project and is in the process of being manifested for flight, hopefully in late 2013 by the Russians and in cooperation with the German team members.

During the development phase, effort has focused on parabolic flight activities to provide correlative data for the flight studies. This has involved measurements on free-floating subjects during the short periods of microgravity available in parabolic flight. Correlative data include rebreathing measurements of cardiac output, and echocardiographic measurements of systolic ejection volume and fraction. In addition extensive work has been done on modeling the effects of systolic ejections into a realistic central vascular geometry. This is particularly important in order to investigate the asymmetric nature of the ballistocardiogram given the asymmetric central vascular geometry (e.g. the aortic arch). Using whole-body MRI scans obtained at UCSD, the Belgian team has reconstructed the individualized vascular geometry of two subjects who participated in the parabolic flight experiments, and work is ongoing to bring these data streams together in an integrated modeling framework. Whole body MRI scans will determine vascular geometries in the spaceflight subjects.

Ballistocardiography is a technology that has been explored over many years in the terrestrial environment, and interest has waxed and waned over those years. This is in part due to the technical difficulties and size of the hardware required for the measurements. However the development of ballistocardiography in spaceflight offers the potential for a possible resurgence in the field of non-invasive monitoring.

Currently, interest in ballistocardiogarphy has increased because of the new trends in home e-health systems. Ballistocardiography may have the potential to be used to study changes in the cardiovascular system over a longer periods of time, possibly in non-laboratory settings. Developments in the biomedical and electrical engineering fields have the potential to bring new developments to ballistocardiography. Technological developments allow the shrinkage of the huge ballistocardiographs to such a small size that they might be embedded in office chairs and wheelchairs, gathering signals from their backrest and seat. Modified electronic bathroom scales could be used, to measure accelerations in the longitudinal axis while the patient is standing. The use of smaller and better accelerometers and of electromechanical film sensors contributes to the potential feasibility of BCG in the terrestrial environment. Signal processing methods have also improved. They allow for improved control of baseline wander due to subject movement and respiration by means wavelet decomposition, independent and principal component analysis, and adaptive filtering to cancel floor and other vibrations in BCG measurements.

This project's funding ended in 2015